In these days the Adriatic coast around Pescara is flooded with 2000+ participants to the IronMan Italy 70.3. Someone who, in a reasonable time, can swim about 2k, bike for 90k and run 21k can be regarded as an “iron” man (or woman). But someone who handles iron as if it were modeling clay and is able to create a piece of art from some scrap iron, he well deserves the name of “Iron Man”, too.

I met Filippo Scioli in his workshop in Guardiagrele, (Chieti, Italy), a mid-sized village nesting at the foot of the Maiella massif. Filippo is 72 and, when I asked him to describe himself, he just said “I am a blacksmith”. However, it is quite an understatement, since from Filippo’s anvil and hammer unique masterpieces come out. His father was a farrier and his grandfather’s job was farming tool maker. His main feature is that his artistic works (be it a dog, a rose or an andiron) do not need soldering because he just need one single piece of iron to accomplish his idea. He just need to hold some scrap iron in his hands and he knows exactly what he can obtain from it.

He likes to say that he is a “cittadino della Terra” (citizen of the Earth) because he does not like labels or definitions. “We’re all citizens of the Earth”, he says. And that is enough for him. 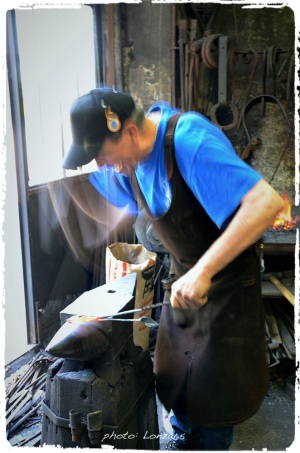 His works can be admired in Texas, Canada, Czech Republic and many other places, his presence is required at the most important arts and crafts fairs and Filippo rarely says no.

Just like the real great artists, he is not jealous of his skills, he willingly teaches everyone who is interested how to forge iron.

His workshop frequently hosts classes of students of every age, but Filippo’s eyes sparkle when he tells me about the disabled students that, on regular basis, visit his shop. “I don’t care if they don’t hit the iron, I am happy to teach them the things I can do.”

Filippo is like a river in full spate. While we talk, he is busy forging a rose with his hammer. I immediately realize that there is no noise inside the shop, but sound. And indeed, the hammer falling on the anvil creates a rhythm that Filippo composes every time he forges a new item. He says “iron talks, the hammer sings”.

You might think that this man in his Seventies is a laid-back guy. Not in the least. He radiates energy and stamina in every single move, his favorite music is country music – two cd players work at full blast in the shop and his favorite singer is Johnny Cash. This larger-than-life blacksmith is a man of parts. Besides being a talented craftsman, a big-hearted man, a great entertainer, he’s a poet, too. When the rose is finished, before we say “arrivederci”, he says these words. 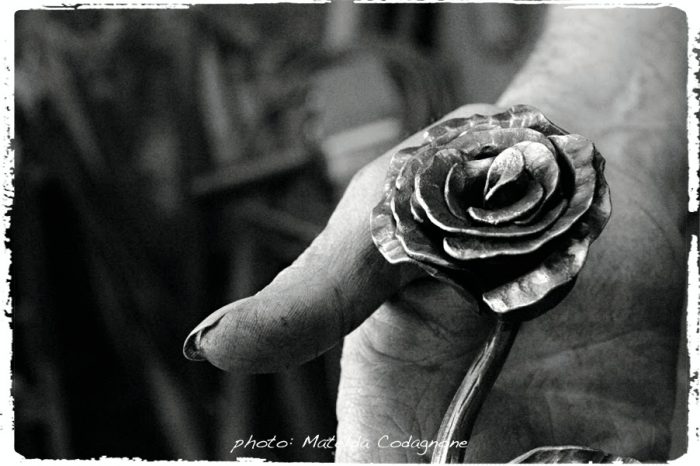 “As you can see, this rose has no thorns. This rose does not wither, it never dies. We can say that it is a perfect rose. But, alas, in this world nothing is perfect, this rose has its flaw. It has no smell. Anyway, I made it with all my craftsman’s heart. Whoever buys it, they will choose its fragrance.”

Next time you see some scrap iron, try to look at it with Filippo’s eyes. It may conceal a rose. And a fragrance, too. 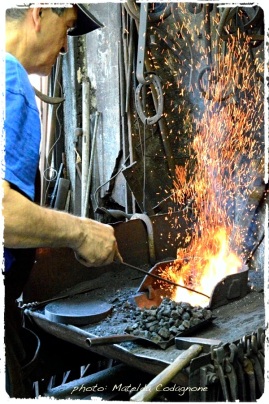 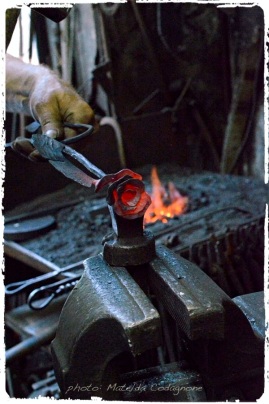 A rose in the making… | photo: ©MateldaCodagnone