I am pretty sure that Primo and Secondo, the two main characters of the delicious movie Big Night, received their education at Istituto Alberghiero in Villa Santa Maria, a tiny mountain village in the heart of Abruzzo…

END_OF_DOCUMENT_TOKEN_TO_BE_REPLACED

“Sky and sea are like two mirrors that reflect each other during the day and listen to each other at night.” (Romano Battaglia)
Cielo e mare sono come due specchi che di giorno si riflettono, di notte si ascoltano.
END_OF_DOCUMENT_TOKEN_TO_BE_REPLACED

Neola, nevola, pizzella, ferratella, cancellata: names are different, the thing you have in mind is always the same. A made-in-Abruzzo waffle, either crunchy or soft, on which you can spread home-made preserves, nutella galore or whatever fancies your tastebuds. END_OF_DOCUMENT_TOKEN_TO_BE_REPLACED

END_OF_DOCUMENT_TOKEN_TO_BE_REPLACED

What do Fellini’s favourite scriptwriter, an exquisite filigree jewel and a typical fishing device like the trabocco have in common?

They are all icons from the same region, Abruzzo, and they feature “Abruzzo Creativo” items. The mind behind the brand is Paola Mucci, an architect by trade and a creative soul at heart. Paola is deeply in love with her region (the Abruzzi), where traditional heritage is still strong and cherished by their people.

The first idea came from the Taranta blanket, a  woollen matted fabric that is manufactured in the village of Taranta Peligna, Chieti. Paola’s intent was to use its unique pattern and weft in furniture design, but its exploitation proved to be difficult.
The creative spark fired after a trip to Sardinia. Sardinia’s crafts and cultural floklore have been updated in so many different ways. Why not to try with Abruzzo? These two regions share many traditional features and the bottom line was to rethink the cultural heritage of the land into a modern way. “Tradizione contemporanea” – new-fashioned heritage – was the the right key and production started with “the mug” series.

Mugs show Abruzzo icons: Ennio Flaiano’s portrait – journalist, humorist and Fellini’s best scriptwriter, the Presentosa – a filigree pendant jewel – and the trabocchi, (a fishing device). The challenge is to bring up to light Abruzzo treasures, especially the ones that are little known and even less promoted. A natural outcome of this is the “Provincia” series, four mugs bearing four “hidden” treasures of each Abruzzo province: Roman mosaic floor in Vasto, Atri Cathedral rose window, Scanno typical women’s dress and Pescara Ponte del Mare (i.e. Sea bridge). 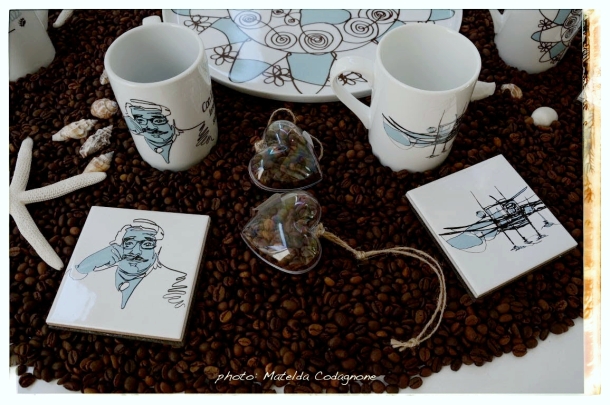 The path was set and Paola thought about new subjects, all of them with a strong and direct link to her region: Bruno the brown bear, the sheep and the “papalina” (a type of oily fish) and kitchenware production includes walnut chopping boards, glasses, pot mats, and coffee cups. 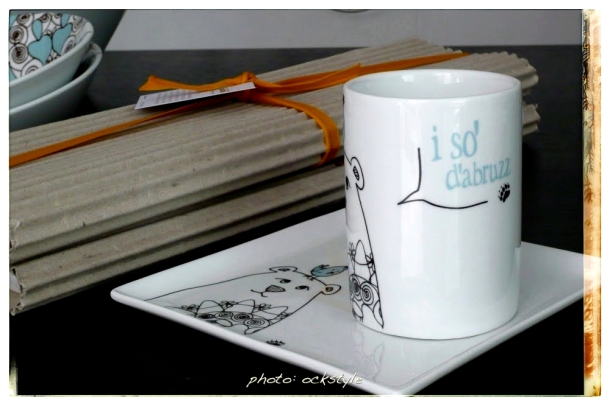 Abruzzo Creativo knows how to combine long-standing cultural heritage with a modern style; because only if you know your roots, you will be able to express yourself in an original way. And that is exactly what Abruzzo Creativo does with its products.

Coffee time! And a kiss from Scanno lady | photo: ©ockstyle 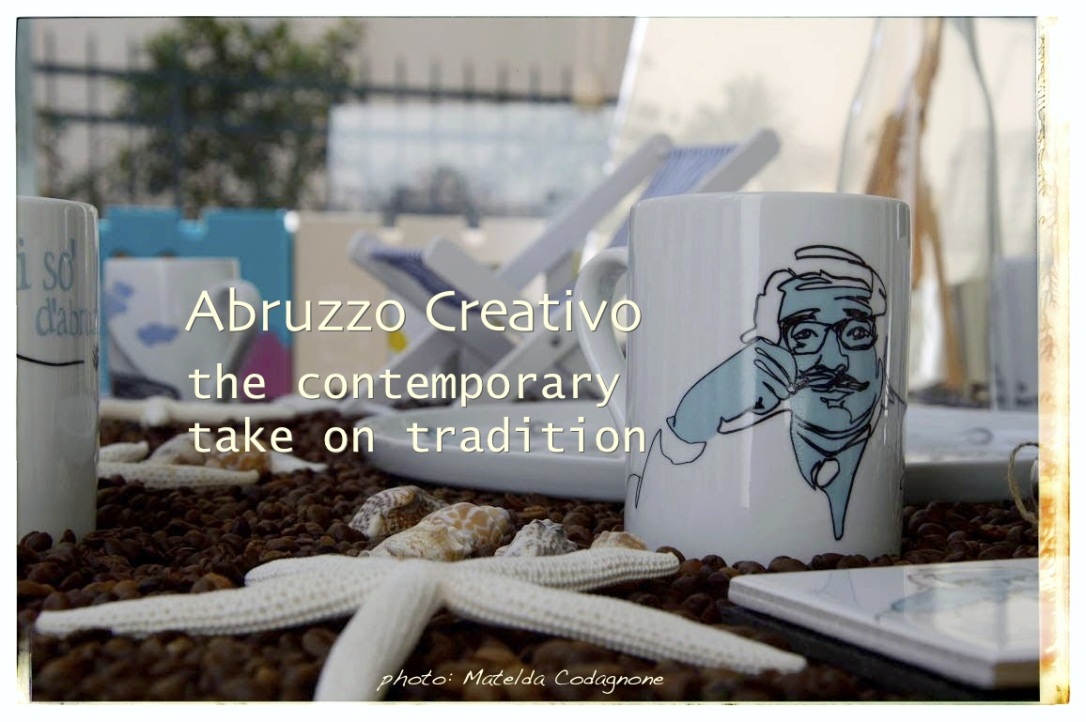 On the world’s most popular e-commerce site you can buy a humorous tee with this slogan joke: ” I don’t need Google. My wife knows everything.” If Amazon people were from Pretoro, a village in the Abruzzo region, they would change the joke into: ” I don’t need Google. Zi’ Tunin’ (Uncle Antony), knows everything.”
Zi’ Tunin’, age 84, however, is far better than Google and Wikipedia: not only does he master a huge amount of information, but he gives it to you with the openness and the simplicity that only wise men can have. 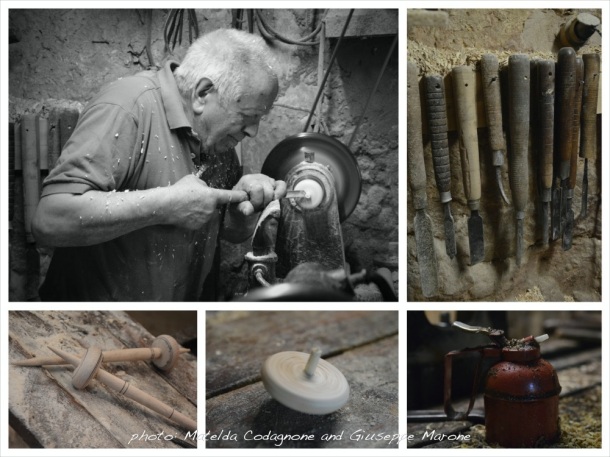 Zi’ Tunin, aka Antonio Palmerio, worked for years in a local company as a carpenter (and as many more other things). Since childhood, he has always had a deep love for knowledge and he devoured all the books he could lay his hands on. Unfortunately for him, his parents could not grant him a higher education so he stopped shortly after primary school. This did not prevent him from becoming a living encyclopaedia. His longing for knowledge and books has made him proficient in many subjects, chemistry, architecture, art, literature. When he retired, he could combine all his passions together into woodworking.

Visiting his workshop on the highest “contrada” (city area) of Pretoro is something difficult to explain, half way between an art history lesson, a visit to a museum and a conversation with an all-around master.

He is fond of architecture and his hobby is to make toy models of the most famous Italian and European buildings: the Duomo of Milan, Notre Dame in Paris, Saint Anthony from Padua Church, you name it. 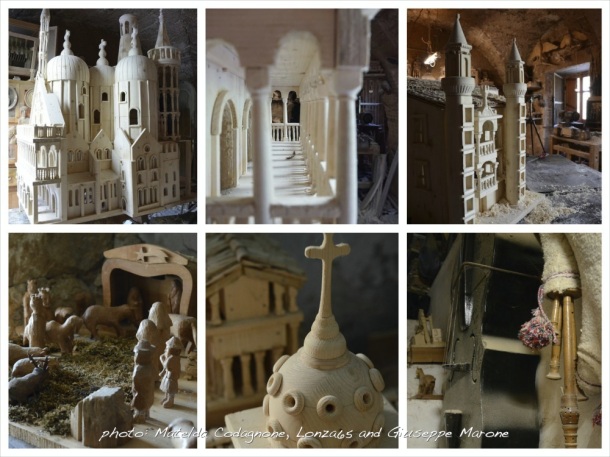 I asked him if he would like to visit the monuments he copies and surprisingly – to me – he said he would not. Except for a couple of trips to Switzerland, Zi’ Tunin has never moved from Pretoro. He is satisfied with his village and his hobby, he says. He can easily make copies of statues, bas-reliefs and human shapes, and he is one of the last artisans left who can make wood spindles for bobbin lace.

A talk with Zi’ Tunin is quite an experience. He can equally talk to you about chemistry and apple tree grafting – as far as I’m concerned I could not say anything sensible about either subject – without any hubris from his side: he is just happy to share what he knows.

Before saying goodbye, I asked him what he would have liked to be if he had had the chance to go on  his education at school. I imagined that he wanted to be an engineer or an architect, because of his love for buildings and architecture. He took me by surprise and said he would be a philosopher because philosophy is the love for knowledge. All he knows he learned from books, and the process is still going on, even at 84.

The world may have lost a great thinker, but it has gained a life coach.

“A good traveler has no fixed plans and is not intent on arriving.” ~Lao Tzu | photo: ©ockstyle 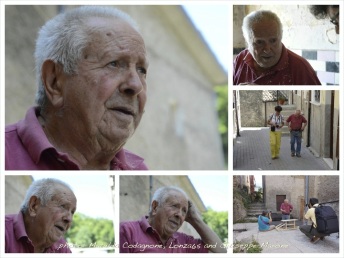 Who is actually working and who is having fun? (Hard to tell…) | photo: ©Lonza65

Zi’ Tunin knows well how to deal with the sharp end (of the spindle) | photo: ©MateldaCodagnone